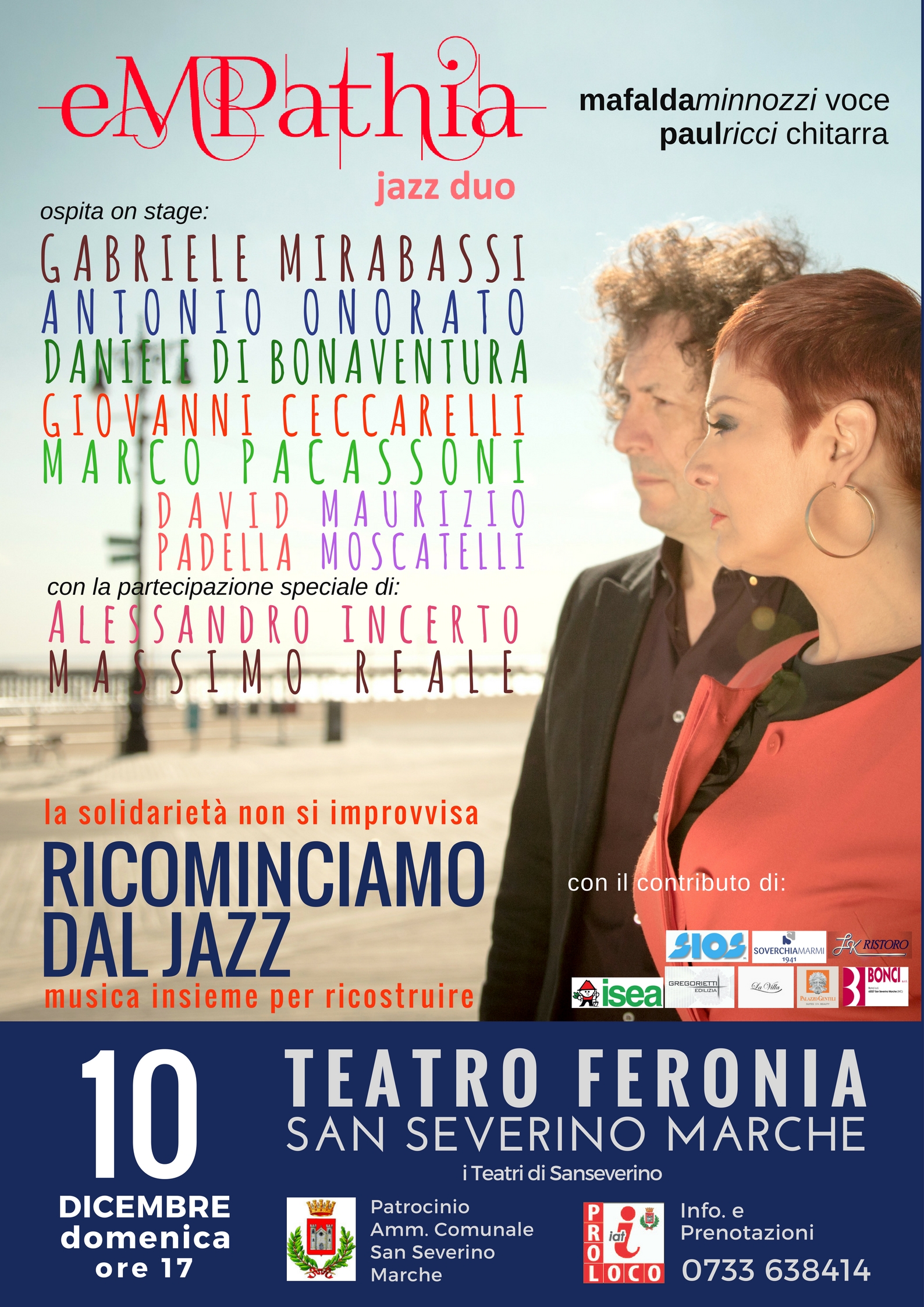 STARTING OVER AGAIN FROM JAZZ
CLICK TO WATCH THE VIDEO

“STARTING OVER AGAIN FROM JAZZ”: Solidarity is not improvised!”

The eMPahia Jazz Duo of Mafalda Minnozzi and Paul Ricci onstage at the Feronia Theater in San Severino Marche will host an all star cast of national and international jazz stars in a musical meeting of solidarity.
#empathiajazzduoplusfriends      #mafaldaminnozzisolidarity      #ricominciamodaljazz        #sulpalcoperunpalco

The stage is the most important part of the theater, it’s a magical place where actions are born and where dreams flourish. From the stage came a call to action for Mafalda Minnozzi and a dream born by her desire to do something for her native land of Marche in central Italy, battered by an earthquake last year.
And so was born the project “Starting over again from Jazz: Solidarity is not improvised!” which will take place on December 10th at 5 PM at the Feronia Theater in San Severino Marche (MC) and feature vocalist Mafalda Minnozzi and guitarist Paul Ricci, also known as the eMPathia Jazz Duo plus Friends.
Organized by Marco Bisconti at MBM Management in collaboration with the town goverment and cultural society, the event is intended to raise funds for the reconstruction of the stage at the Cinema Teatro Italia, an important cultural center for the town that was damaged by the earthquake.
The goal to restore the stage can be made possible by a strong turnout at the concert. The statistics from the earthquake speak for themselves: in San Severino alone there are more than one thousand damaged buildings and about 1,500 displaced families.
Always linked to these lands where she was raised and often returns to as a respite to international touring (the eMPathia Jazz Duo will kick off 2018 with their “Cool Romantics” USA tour featuring shows at Birdland, Mezzrow’s and other “cult” spots in NY) Mafalda has created this event at the Feronia theater in solidarity with guest artists of great importance and sensibility like the clarinetist Gabriele Mirabassi, the bandonean player Daniele di Bonaventura, pianist Giovanni Ceccarelli, vibraphonist Marco Pacassoni and the guitarist Antonio Onorato, along with two talented local musicians David Padella (acoustic bass) and Maurizio Moscatelli (trumpet).

Around eMPathia, the current musical project already presented in Germany, Portugal, Brazil and the USA, Mafalda and her guests will bring an evening of extraordinary musical encounters to life under the artistic direction of the guitarist and arranger from New York, Paul Ricci.  Paul comes from the New York jazz scene and is a truly international artist, a globetrotter of ever traveling music on stages around the world. Through some of his important collaborations he has played with Roy Haynes, Kenny Barron, Gary Burton, Bebel Gilberto, Astrud Gilberto, Mino Cinelu, Randy Brecker, Manolo Badrena and the great Harry Belafonte.
There will also be two exceptional celebrity spokesmen. Initiating the evening’s ceremonies will be the noted actor from Naples, Alessandro Incerto, featured in major TV series like “Un posto al sole”, “La squadra”, and “I Bastardi di Pizzofalcone”. Capping off the evening will be another fine actor from Florence, Massimo Reale, fresh from the sucessful theatrical production of “Il Penitente” at Rome’s Eliseo theater with Luca Barbareschi and in the TV series “Rocco Schiavone” with Marco Giallini.
Mafalda Minnozzi’s story is a bit unusual. Her journey that would bring her sucess began in Rome where she carefully cultivated and fine tuned her talent studying voice, modern dance and finally drama at Saverio Marconi’s “Company of the Rancia” school. She conquered the public of Rome world famous night club “Cabala” and joined the cast of RAI TV’s show “UnoMattina” and her growing popularity led her to tour in Italy and in Europe until she reached Brazil. In that land, for 20 years, she established a grand sucessful career releasing 12 CDs and 2 DVDs, participating in shows on the most important TV and Radio networks and singing in duet with artists of the caliber of Milton Nascimento, Toquinho, Martinho da Vila, Paulo Moura, Leny Andrade and Guinga, among others.
A charismatic performer endowed with a vocal range and an uncommonly wide palette of timbral vocal colors, Mafalda commands the notes, shaping them into striking melodies. Her voice is like an ardesia stone blackboard, dark and melodious with tones of refective color and vocal nuances that Paul Ricci, integrates with his guitar into a delicate and essential sonic plot. Their repertoire is dedicated to great songs from the Italian, Bossa Nova, French “Chanson” and American songbooks.

For information and reservations:

TIckets: 20 Euros. Reserved seats also available by telephone and can be picked up at the box office of Teatro Feronia until 30 minutes before the concert.