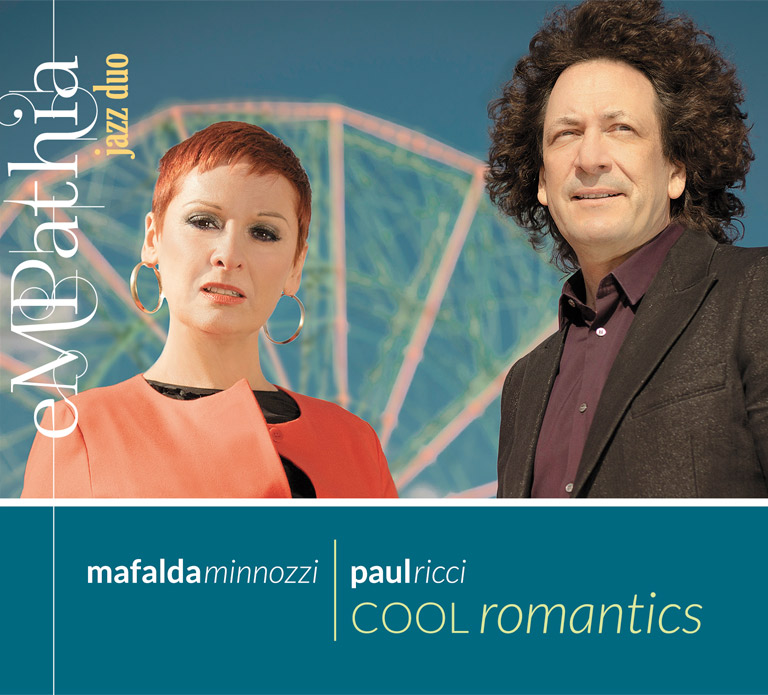 In this past decade, Jazz has re-introduced itself into popular song through classic or retro sounds and pop music has further entered into the Jazz songbook embracing and expanding itself to new audiences.

In this spirit, the eMPathia Jazz Duo, consisting of Mafalda Minnozzi’s vocals and Paul Ricci’s guitars, is presenting its third CD in a short two-year period.
This CD entitled “COOL ROMANTICS” caps off a trilogy and arrives at an evolution in their sound that was pre-destined. It is a sound which has come full circle to go beyond the retro sonority and to delight in the interplay of an ever-refined dialogue with a more adventurous improvisational spirit that taps into the intimate beings of the musicians depicting their unique experiences and intriguing story of life.

What Paul and Mafalda preserve from their pair of recent CD’s is a firmly grounded beat with a fresh outlook on classic songs where everything is on the table for reconsideration. Groove, tempo, harmony and a carefully chosen mood that ranges from innocence to wildness are all fair game for eMPathia’s imaginative arrangements that draw from many styles and from an extensive career performing in festivals, clubs and theaters in Europe, Latin America and the USA.

Listening to “COOL ROMANTICS”, which completes the work of their trilogy, you can hear all the influence and inspiration that are fruits of many important musical collaborations experienced inside and outside of the duo. Mafalda, born in northern Italy, collaborated with many stellar international artists including Gene Bertoncini, Milton Nascimento, Martinho Da Vila, Leny Andrade, Lucio Dalla and Guinga while New Yorker Paul Ricci has collaborated with Astrud Gilberto, Steve Jordan, Harry Belafonte, Randy Brecker, Jaki Byard, Dom Um Romao, Bebel Gilberto and dozens of other Latin, Brazilian and Jazz artists.

On “COOL ROMANTICS” Mafalda’s vocal alchemy combined with Ricci`s unique evocative style, noted in The New York Times, enable them to effortlessly transit between a Samba, Bossa Nova, Swing or Blues resulting in a signature sound that ranges from a dramatic reading of Antonio Carlos Jobim’s classic “INSENSATEZ” and lesser known “CORRENTEZA” to a swinging playful trip through Paolo Conte’s VIA CON ME to Luigi Tenco’s TRISTE SERA.  Although Mafalda sings in her native Italian, English (DINDI, MY SHINING HOUR), French (Django Reinhardt’s NUAGES gets a bluesy reading) and Portuguese (songs by Jobim and Carlos Lyra), the common language here is the dialogue between the two elements where the lines between the guitar and voice are blurred to the point of suggesting other instruments for a larger sonic landscape.

Grammy award winning producer Jeff Jones collaborated with the duo on 10 songs to brilliantly capture the spontaneity and freedom of their many live performances resulting in an identifiable singular sound on “COOL ROMANTICS” where Ricci’s guitar breathes around the many colors of Mafalda’s spirited voice. The resulting beauty reflects the emotions of the performers and promise to provoke the emotions of the listener to summon up the “cool romantic” in everyone.